Kathryn Casey has written six true crime books, three mystery novels and countless magazine articles. Fortunately for her readers, she doesn't appear to slowing down - ever. Indeed, she's had two books published in the last four months. I've read each of her true crime titles and am starting her novels next.
SHATTERED, released in August, was in the top ten on Amazon's best selling true crime list for over a month prior to publication, and continues to be a best seller in paperback and kindle. SHATTERED is the story of David Temple and Belinda Lucas Temple, who appeared to be the model of the all American ideal couple. David and Belinda were attractive, popular, successful, well-educated, and starting a beautiful family. That is, until the myth was exposed and destroyed by the horrible murder of Belinda and her unborn baby.
Kathryn Casey has somehow made room in her schedule to visit Madame Perry's Salon to talk about SHATTERED, so let us begin.
Perry: Welcome to Madame Perry's Salon, Kathryn. Tell me, at what point did you begin following the murder of Belinda Lucas Temple who was eight months pregnant with a baby girl when she was murdered; and when did you decide you wanted to write this book?
Kathryn Casey: I noticed the articles quickly after the murder, and then kept tabs on the case over the years, googling it every so often to see if there was any news. I knew that if the case was ever solved/prosecuted, I would have to be in the courtroom. I was fascinated by what had happened and the long, seemingly endless investigation. For a long time, nothing. Then David Temple was arrested, and I made plans to go to the trial. That was my first real commitment of time, six weeks in the courtroom. From that point on, I worked on the book for about a year, full time.

Perry: Because of his stellar football career David Temple was practically treated like a rock star in the community. How challenging was it for you to get people who knew and admired him to talk about him?''

Casey: It wasn't easy, but then that's often a challenge with true crime books. But I was persistent, and it paid off. Eventually, many people did talk with me and the book took shape. As much as his celebrity status in Katy, the problem was that quite a few people were afraid of David. He's a big, muscular guy with a notoriously bad temper. Even though he was behind prison walls, some people worried for their safety.

Perry: The Temple family certainly appears to be a very tight clan, even to the point where the families of their sons' wife were not considered during major holidays and events. Therefore Belinda was never with the Lucases, her own family, on Christmas or other special days. Yet after her brutal murder when police questioned David's involvement the family - except for Belinda's twin sister - loudly defended him. It must have been very difficult to get them to discuss the loss of their daughter and granddaughter.

Casey: It wasn't too long after the murder before Tom and Carol Lucas began questioning their son-in-law's possible involvement. By the time I met them, they'd spent years fighting to bring David to justice. Once they understood that I was committed to writing a fair and accurate account of their daughter's murder, they agreed to talk to me. Still, those are painful memories. It's often very difficult for parents, siblings, loved ones to discuss the awful moment of that first phone call, signaling that someone they love has died.

The days that followed are so emotional, and then there's that awful realization that a young man they thought of as a son was a controlling, abusive husband and a murderer. The Lucases carried the burden of Belinda's murder for so many years, fighting for justice. It was truly heartbreaking.

Perry: I've read every one of your true crime books, Kathryn, and you get deep in the stories of some evil, twisted people. Do you have some process you go through to sort of detoxify yourself emotionally and psychically after finishing an intense true crime story?

Casey: No, I'm really fine. The secret is that when I work on a true crime book, I meet maybe one or two really bad people, a few I probably wouldn't invite over for dinner, but for the most part dozens and dozens of truly fine individuals simply trying to live their lives. To write a book like SHATTERED, I talk to somewhere around 100 sources. Maybe five percent are unsavory. For the most part, the people I meet are good people simply caught up in a horrible tragedy.

That said, I have begun writing crime fiction. My third novel, THE KILLING STORM, is coming out on October 26th. I do think that the fiction helps, that it's a release from covering real-life murders. I have so much fun with it that I think of it as therapy.

Perry: Congratulations on the excellent sales for far, I wish you much more success.

Casey: Thank you! It's appreciated.

You may visit Kathyrn Casey's website, follow her on Twitter, and her author page on FaceBook. And of course, get out and buy her books now.
Amazon Belinda Lucas Temple David Temple Kathryn Casey SHATTERED The Killing Storm true crime

Kay Huck said…
I am a great fan of Kathryn Casey's book, both true crime and her fiction. In fact her fictional Texas Ranger Sarah Armstrong is a great character. I love how she interweaves Sarah's human ordinary life with the work life as a profiler and active detective.

Jennifer Perry said…
Kay, I can't wait to get the Sarah Armstrong series, especially after your enthusiastic endorsement! I can't get enough. Casey's on my short list of writers that I should offer to do gardening and housework for so they'll have more time to write for us.
Thanks for dropping in, your comments and suggestions are welcome
Madame Perry
October 27, 2010 at 5:16 AM

Julie said…
I lost a little brother to what appears to be a random act of violence, so I have great sympathy for Belinda's family and total respect for Kathryn for being able to tell her story in a fashion that is fact-based and not sensationalized.

Jennifer Perry said…
Julie (jewelknits) I am so sorry for the loss of your little brother. My favorite writers of true crime are Kathryn Casey, Diane Fanning and Ann Rule because they are strong on research as well as the human and emotional elements. Plus I hope people reading will be more aware of their surroundings, and willing to step up with information for authorities when needed.
October 27, 2010 at 6:56 PM

Unknown said…
Wow, great interview. I actually haven't read any of her books, but I'm always amazed at writers who do these types of works.
October 30, 2010 at 8:22 PM

Leigh Russell said…
What an interesting post on a fascinating blog. Thank you very much for inviting me to visit you, I'm looking forward to it!
April 25, 2011 at 2:59 AM

Jessica said…
I can't imagine what it must be like to follow a real life crime such as this one so closely and to write a book about the subject and what you have learned. I read a previous blog about The Killing Storm and I think you have me hooked!
August 9, 2013 at 6:20 PM

Popular posts from this blog

David Herrle Enraptures Us With "Sharon Tate And The Daughters Of Joy." 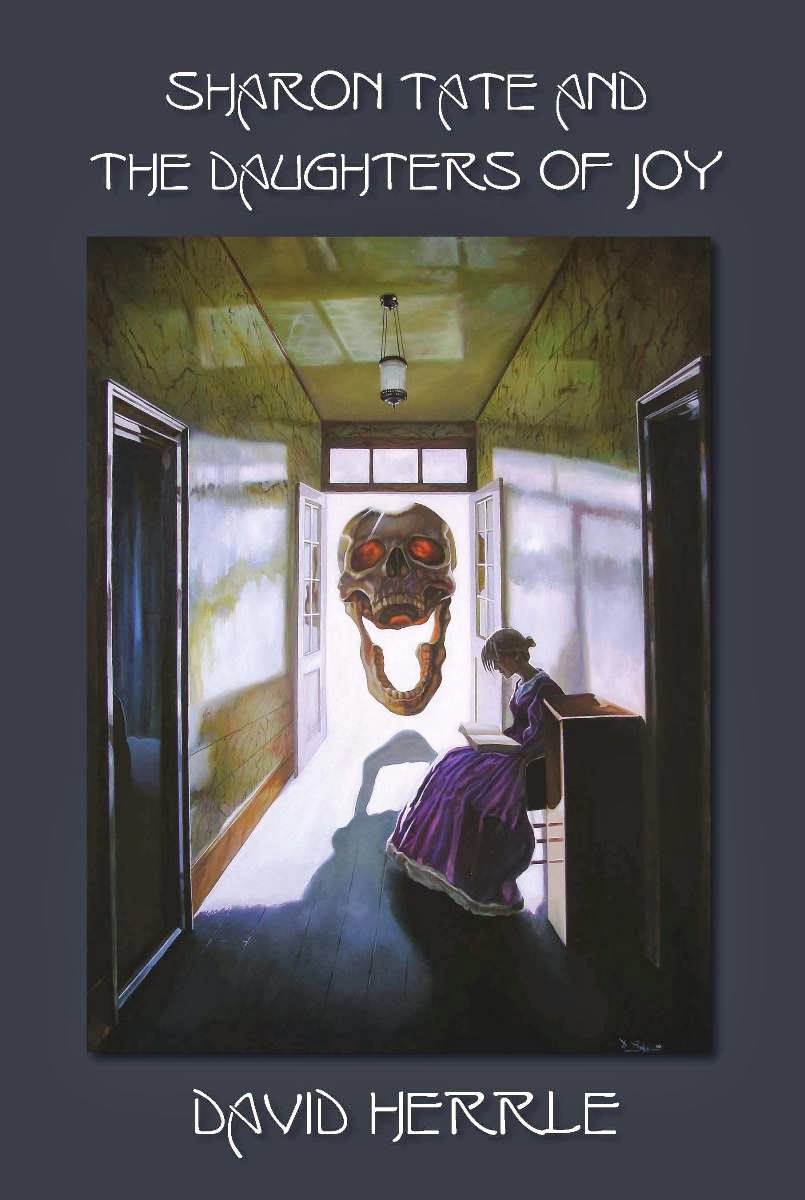 Lovers of poetry may know David Herrle for his book, Abyssinia, Jill Rush and his popular ezine SubtleTea. Now he's here to discuss his new book, which blends poetry with prose, Sharon Tate And The Daughters Of Joy. We're joined by a dear friend who actually introduced me to David's work years ago, poet and author Collin Kelley.

Collin Kelley: In one sentence describe this new collection.
David Herrle: I haven’t a short wind in my body, but, aside from being bubblegum self-psychoanalysis, the book is an aphoristic odyssey through aesthetics, art, beauty, sexuality, atrocity, mortality and salvation contextualized by the grisly dooms of Queen Marie Antoinette, Ripper-victim Mary Jane Kelly and Sharon Tate.
Mme. Perry: The reader is guided in an orderly manner into some shocking, sharply defined and richly pigmented places from Invocation to Sermon to Benediction. How did you determine the order of the book?
DH: Early on the book was intended to be about only Sharon Tate and th…
Read more
August 28, 2014

All Hail The True Crime King - Gary C. King! Gary C. King is one of the world's foremost true crime writers and serial killers expert, a reputation he has earned over the last 33 years with the publication of more than 500 articles in true crime magazines in the United States, Canada, and England.King's many television appearances include Entertainment Tonight, Larry King Live, E!, BBC, Court TV, Inside Edition. I could go on but let's talk to man himself. Madame Perry: Welcome to Madame Perry’s Salon, Gary, it’s an honor to have you here. Please make yourself comfortable. My first introduction to true crime books was the reigning queen of the genre – Ann Rule. Let me share a quote from your website. ”King took over Ann Rule’s job as Pacific Northwest stringer for True Detective, Official Detective, Inside Detective, Front Page Detective, and Master Detective magazines, writing hundreds of nonfiction articles under various names until those magazines ceased publication in th…
Read more

Kevin Guilfoile, author of The Thousand and Cast of Shadows.

I've been a Kevin Guilfoile fan since his first novel, Cast of Shadows, was published. When he agreed to be a guest in Madame Perry's Salon to talk about his newest book, The Thousand, I knew I'd want one of my more sophisticated and intellectual pals to sit in the co-interviewer seat. So I am pleased to also introduce my friend Ann Guilfoile.

Madame Perry:The Thousand has an intricate web of plots and motivations. A couple of characters we can imagine from real life folks like Johnnie Cochran or Phil Spector. Yet many are original in their personal quirks, burdens and needs. How do you draw or create these characters?

Kevin Guilfoile: Inventing the characters is the fun part, although I'd be hard pressed to explain how you do it. They start as imaginary playmates of some sort. Then you drop them into a situation and figure out how they would react and that's how your plot unfolds. Of course you don't really get to know them until you start writing them, and so …
Read more